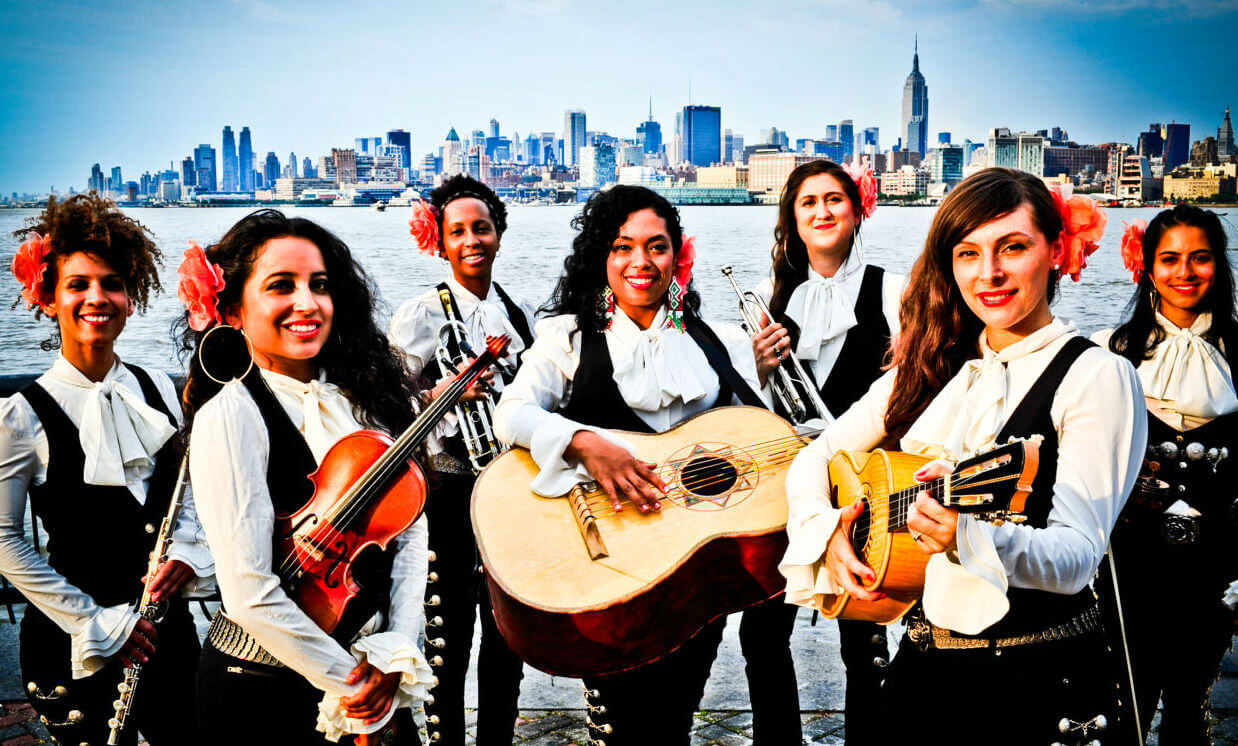 Mariachis are a combo of Western movie outlaws, Mexican folklore and a little bit of rock and roll with polka and waltz mixed in. These musicians are always in groups of 3-10 and dressed up in emblazoned costumes ready to kick ass and look and sound FABULOUS doing it. You know, like Lucky Day, Dusty Bottoms and Ned Nederlander?! #thethreeamigos!

The first time I was introduced to the concept of mariachis was the 1986 movie, ‘¡Three Amigos!’ and I’ve never been the same. Freakin’ Chevy Chase, Steve Martin and Martin Short in their matching charro outfits, huge sombreros and musical mastery had me laughing and singing along wondering where the hell the writers got the idea from. “MY little buttercup, has the sweetest smile…..”

OK, so they were more of a comical crime fighting team than a true mariachi band, but the classic scene at El Guapo’s birthday was performed by a group of real mariachis that kill it! Aayayayayayayay!

This scene (as well as “Blue Shadows on the Trail”) prompted me to check out good old Wikipedia for more info on these classical Mexican musicians. I learned that…

‘Mariachi’ is a style of music and musical group performance that dates back to at least the 18th century, evolving over time in the countryside of various regions of western Mexico. It has a distinctive instrumentation, performance and singing style and of course, clothing. To say the least.

Armed with trumpets, violins, cellos, guitars, crazy high voices and charro suits, these bands are torn from the pages of Mexican history books, turning any event into a raging Mexican fiesta. As a matter of fact, in 2011 UNESCO recognized mariachi as an Intangible Cultural Heritage. The listing cites that: “Mariachi music transmits values of respect for the natural heritage of the regions of Mexico and local history in the Spanish language and the different Indian languages of Western Mexico.” And you don’t dick with UNESCO.

The term ‘Mariachi band’ is also a redundant term for a Mariachi because the word ‘Mariachi’ itself in Spanish implies a group of musicians playing Mariachi music. The music originated in center-West-ish Mexico. Most claims for its origin lie in the state of Jalisco but neighboring states of Colima, Nayarit, and Michoacán have also claimed it. However, by the late 19th century, the music was firmly centered in Jalisco.

And guess where I was now living?! YEP. In the birth canal of Mariachi-dom…Jalisco, Mexico. Time to start tracking down some bands and getting some answers to the question…How did this musical genre get to be so badass? When you hear it…all you can think of is Mexican westerns and Cinco de Mayo parties. I stepped out my front door and started searching…

Clearly my first stop was the Plaza De Los Mariachis in Guadalajara, which is a pedestrian-only plaza in the historic center. This plaza has over 100 years of tradition, but was officially dedicated to Mariachis in 1962 by the then President of México, Adolfo López Mateos. The plaza got a second resurgence in 2009 when Gustavo Ruiz Velasco Nuño invested $7 million pesos (about $350,000 USD) to revitalize the facades, arches and the colonial homes facing the plaza.

Today, these former homes have been converted into restaurants, musical supply stores and clothing/accessories shops for mariachis to buy their unmistakable costume gear. There’s even a tequila and “tequila paraphernalia” store which is where I I presume they stock up and where I certainly stocked up for later.

One thing that I didn’t find on this Sunday in the plaza were actual mariachis playing music. Weird right? Maybe Sundays are their day to drink tequila and cerveza and spend time with their families? Oh well. The plaza was adorned with colorful papel picado flags decorating the sky so I was okay listening to them flutter in the breeze instead. Plus, I had tequila so it was going to be a Sunday Funday with or without mariachis!

My next research stop was none other than the town of Tequila, Jalisco – the birth canal of tequila. It’s only a one hour car drive or a 2 hour train from Guadalajara, so why the hell not. Two great tastes that taste great together! I needed to interview an insider and if there weren’t any inside the Plaza of Mariachis for God’s sake, I figured there HAD to be some in Tequila!

I wasn’t wrong (as per usual ;). Here is what I discovered as I stepped off of the Jose Cuervo Express train…or as I like to call it, “Allison decides to drink booze before 9am because it’s all inclusive”:

IMMEDIATELY as we stepped off the train, these dudes started playing. And playing hard. I was already wasted as you could probably tell from the video so I wasn’t in interview mode at the time. I decided to just record and commentate instead.

This mariachi band’s secret weapon were the two adorable boys in the front. I don’t even like kids (as I mention in the video), but I was ready to take them both home if they promised to never ever talk and only play mariachi music. Instead of kidnapping them, I opted for the Jose Cuervo distillery tour because I was getting thirsty. Again.

My day in Tequila went something like this….Tequila, mariachis and singing, Jose Cuervo distillery tour and singing, super filthy cantina and singing. And then back to Jose Cuervo’s agave field with dancing and more singing. I was thinking that what these mariachi bands really needed was a female singer (aka me), but what I discovered next was even better…

(After waking up from day drinking in Tequila) I continued my quest to discover how mariachis became synonymous with pretty much all fun things Mexican. In my mind, I’ve always pictured mariachis as these hombres with cool mustaches, machismo costumes and these booming voices projecting Mexican folk songs to party goers. My mind was blown when I discovered an article from the NY Times from 2013 titled, “An All-Female Band, Making Its Way in the World of Mariachi.” Holy fuck, GIRL POWER MARIACHIS!!

“There’s something about putting on a mariachi suit that makes you feel like a badass.” – Mireya Ramos, Founder Mariachi Flor De Toloache

The New York-based, GRAMMY award winning and all-female mariachi band, Mariachi Flor de Toloache, was founded by Mireya Ramos in 2008 as a way for women to join forces in a safe environment and create and perform mariachi music. They have gone on to win the Latin Grammy Award for Best Ranchero/Mariachi Album and are the most diverse mariachi group in the world. The members hail from Mexico, Puerto Rico, Dominican Republic, Cuba, Australia, Columbia, Germany, Italy and the United States!

Although only one of these ladies is Mexican, these worldwide badasses took a musical genre that for generations had been steeped in Mexican machismo and owned it as a path to empowerment, diversity, strength and fame. Y’all know I dig that. #TheFutureIsFemale

Their most recent single was released on Valentines Day, 2019. Besos De Mezcal – ‘Kisses of Mezcal’ was produced by Camilo Lara, who produced all of the music for Pixar’s “Coco” (and I do love me some Coco!).

So basically, after all that tequila and web surfing I didn’t get a whole lot of information that Wikipedia hadn’t already told me, BUT I did get rip roaring drunk and made a pretty neat girl power discovery! So saludos mis amigas! Now I’m going to go find me a kiss of Mezcal and celebrate. Again. Ayayayayayayay!! BTW…this here below is a little bonus!

I would like to dedicate this post to Ashlei Mars Austgen and Becky Fabra Beach for reasons they know.

Funny S#*t You See In México

My Story / The Actual History of Papel Picado Flags﻿