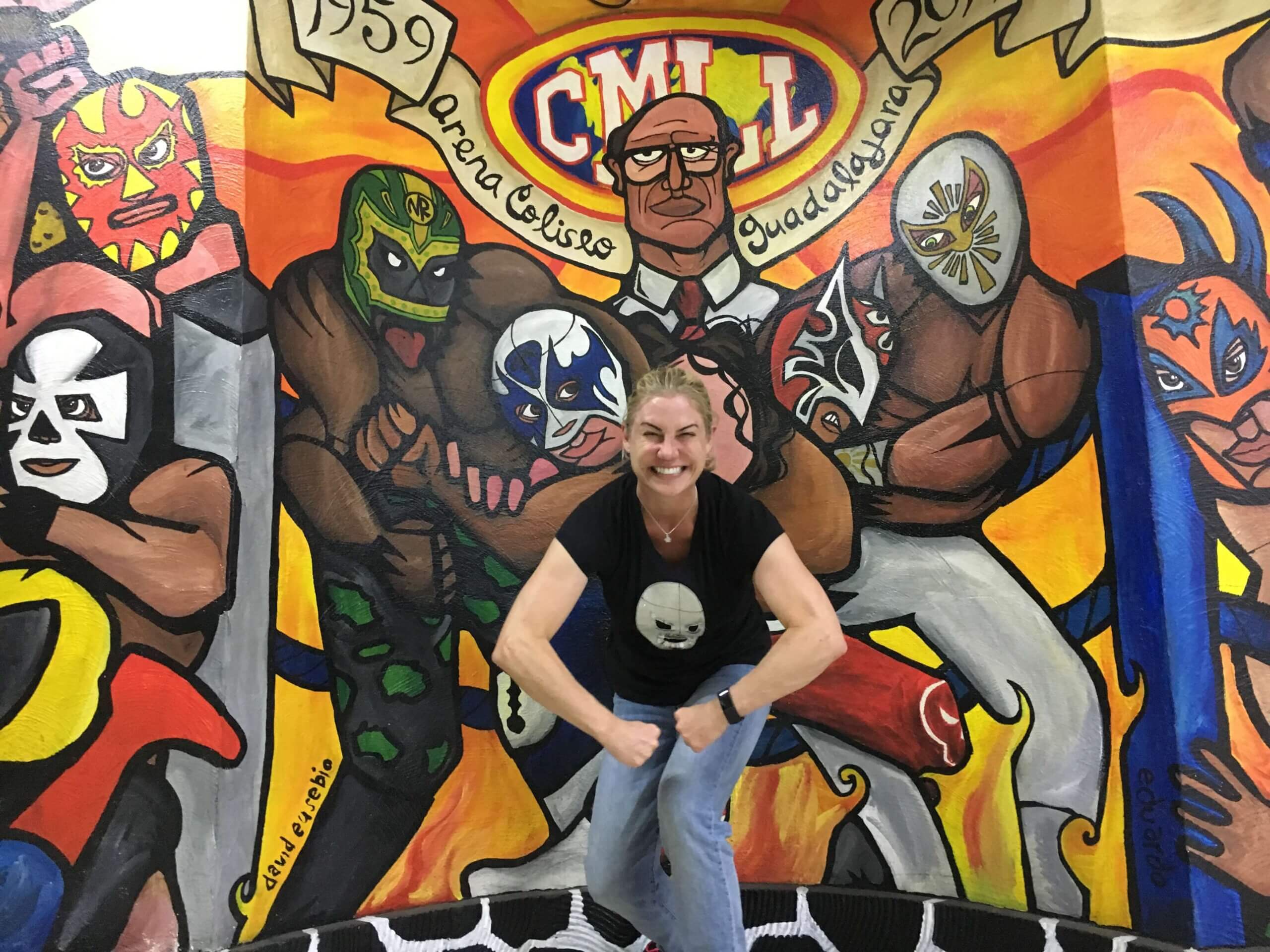 Before living in México, this is what I knew about Lucha Libre: Big dudes wore masks and capes, flung themselves through the air and fake wrestled. I didn’t have a clue as to why México was so crazy about Lucha Libre, but I was going to figure it the fuck out.

I was wandering through the streets of Guanajuato, México looking for a filthy cantina when I noticed a poster stuck on the window of a pulqueria (more info on that in another post) that read Pagano vs. Psycho Clown vs Rey Escorpion.

Three days later I’m rolling up to my first Lucha Libre fight and praying to God there’s enough cold beer to handle the probable cray cray. This event was in Guanajuato and Guanajuato doesn’t have an auditorium for Lucha fights. It has a Centro de Espectaculos which is a “Center of Shows”. They call it ‘El Establo’ or “The Stable” – and that should have been my first clue as to what I was in for.

This Center of Shows is actually an old rodeo ring. It’s dusty as fuck with crappy old stands, chicken wire everywhere and situated directly behind a lovely wedding event hall where there was a beautiful wedding going on this fine Saturday night.

Back to the scene – my amigos and I were waiting patiently in line in the gravel parking lot to get into said rodeo ring at 8:15 pm. In classic Mexican tradition, any event that starts at 8pm will likely not get going until at least 9pm. It’s part of the charm.

Anyway, at 8:20 three big trucks carrying a shit ton of foldable chairs and beer knock everyone in line out of the way because you know, they needed to set up the ring side seating and ice the beer. Needless to say, the beer was warm as shit, but things finally got under way around 9pm as we should have expected.

As the opening bell rang, I knew that shit was gonna get real…real fuckin’ nuts. The music was blaring, the lights were dance club flashing, kids were running around like yahoos in their masks and capes with freaking noise makers and the rest of us were going absolutely batshit crazy.

Every time a fighter entered the ring, the old ladies and kids would either shout out words of encouragement or ‘PUTA!’. For those of you unfamiliar, in Spanish, ‘puta’ means p***y. Yep.

The wrestlers were acrobats, comedians, villains, heroes, male, female, fit, fat, giants, midgets, masked and unmasked, but the one thing that they had in common was that they were all ENTERTAINERS. Everyone in and out of the ring including the MC’s, referees, beer vendors, the crowd and this little gringa from Texas were all a part of the big show. I was hooked and now demanded my husband to buy me a lucha libre t-shirt, sweatshirt and stickers from the vendors outside the gate!! And more lukewarm beer.

As I write this post, I have attended 5 Lucha Libre events in 4 different cities in México and I have found myself in a rabbit hole of research as to why Mexicans are so enraptured by Lucha Libre. It has even inspired to me collaborate with my Papel Picado artist in Puebla to create our signature lucha libre inspired papel picado.

There is a lot to know about this sport-tainment. To break it down simply, here are five fascinating things that I’ve learned about Lucha Libre and why it is such a huge part of México’s history and culture:

1. The direct translation of Lucha Libre is “Free Fight”.

The word ‘lucha’ in Spanish is “fight”, stemming from the verb ‘luchar’ which is “to fight”.

The word ‘libre’ means “free”, but not like money (that would be ‘gratis’). ‘Libre’ in Spanish refers to a person having liberty and freedom.

The figurative translation is actually ‘Freestyle Wrestling’. And since Lucha Libre started as amateur style wrestling with NO restrictions, anything goes! “Lucha Libre” fighters are free to fight anyway they want. And Boy Howdy, do they!

2. In 1910, Post-Revolution, Lucha Libre became an escape for Mexicans to vent their political and socioeconomic frustrations.

The history of Mexican wrestling dates back to 1863, during the French Intervention in Mexico.  Yes, that was the time the FRENCH invaded – Cinco de Mayo style. Then there was the revolution…

Once the Mexican Revolution ended in 1910, Lucha Libre really caught on. The good people of México were sick of wars, poverty and the unfairness of living in a new situation where the separation between the have’s and have not’s (created by the European infiltration of the indigenous tribal cultures) was widening. The Mexicans would come to Lucha Libre to escape life for a few hours while ironically watching a theatrical version of real life play out in front of them – more on that in the next section.

It was liberating to come into an arena and yell like hell. Yell for their luchadores, yell at the luchadores and yell at the referees. FYI…If you don’t like yelling, don’t go to a lucha libre event.

3. Every match is an ongoing battle between Rudos (Tough Guys) and Técnicos (Good Guys).

The Tough Guys are rule breakers…basically the villains. They fight like every event is a bar brawl. They represent any given evil in society and are the kind of luchadors you love to hate. The rudos may represent politicians, another country, the tax man or a company/political party. You know, The Man.

The Good Guys are rule followers and certainly combat in a more martial arts-y style. They play by the rules of the traditional Greco-Roman wrestling. Until they get really pissed off. They are the kind of luchadors you love to love! They represent The People. Unfortunately, they don’t always win.

The ongoing battle between the two is reflective of how Mexicans (The People) felt after La Revolucíon and a general coming to terms that good guys don’t always win. Unfair fights are a way of life. That is some deep shit.

4. There are also female luchadors and one was actually a serial killer!

I love me some girl power and the women that I’ve seen fight in the Lucha ring could beat the crap out of 90% of the men I know, including the male luchadors. Las luchadoras are strong, fearless and dare I say sexy in the ring.

Sure, there is some hair pulling and name calling and it is pretty clear that they have been instructed to “cat fight” since this sport-tainment is based on men’s perception of masculinity, femininity and justice. But it is still fun!

One famous luchadora, Juana Barraza Samperio, who wrestled under the moniker ‘The Lady of Silence’ was arrested in 2006 for killing somewhere between 42-48 elderly women in México City. She ended up being more famous as “The Old Lady Killer” than The Lady of Silence, but she is pretty quiet now and still serving her 759 years of incarceration at the age of 61. Evidently she had mommy issues. Big time.

The wrestling mask was introduced in 1936 and worn by Jesus Velásquez. To be fair, masks were a big thing with the Aztecs and that inspired the tradition. However, masks being synonymous with Lucha Libre is famously attributed to El Santo in the 1940’s.

In fact, El Santo wore his mask ALL THE TIME and worked hard all of his career to conceal his true identity. He did not reveal his real face to the public until damn near his death. There was a time when his soon to be ex-wife, during divorce proceedings, released pictures to the press of El Santo’s face. Freaking divorce. His reps denied it was him. At least he was buried in his silver mask…silver lining 😉

A mask-less luchador means that in their fighting history they have caused shame to themselves or their fighting partners. This is a no-no. OR that they are just sick of playing a particular character and are ready to put it to rest and take on a new persona with a new mask. This is a yes-yes. Either way, masks are good.

After seeing 5 Lucha Libre matches so far, I’m proud to say that my Spanish has improved. The last event I attended was a ‘family’ event and I learned that kids also have a lot of pent up frustrations and knowledge of Spanish cuss words that they let fly right there in front of their parents and spectators.

Here is a list of words and phrases screamed out by the kids behind me…Allow me to translate to English:

“Bitch! Fat bitches! You live in a playhouse! My mother fights better than you! Roll him like a rug! Stop crying! Asshole! Nice boots, cowboy! Fuck your mother!” And most importantly, “Don’t hit the beer guy!”

I 100% approve of all of these. And to be fair, old ladies were screaming the same thing. With all of these insults being thrown at the luchadores, it’s no wonder that the luchas start screaming back at the kids and old ladies – everyone gets all worked up! It’s awesome!

The screaming kids, flying luchadores, hapless referees and the beer guys had me laughing til I was crying and yes, screaming right along with them. Everyone is in on it and everything about Lucha Libre is loud, rude and full of debauchery. Fuck yes, I’m hooked!

Experience México wherever you are in the world with this Lucha Libre inspired Papel Picado! Buy Yours Here.

Funny S#*t You See In Mexico

My Story / The Actual History of Papel Picado FlagsM