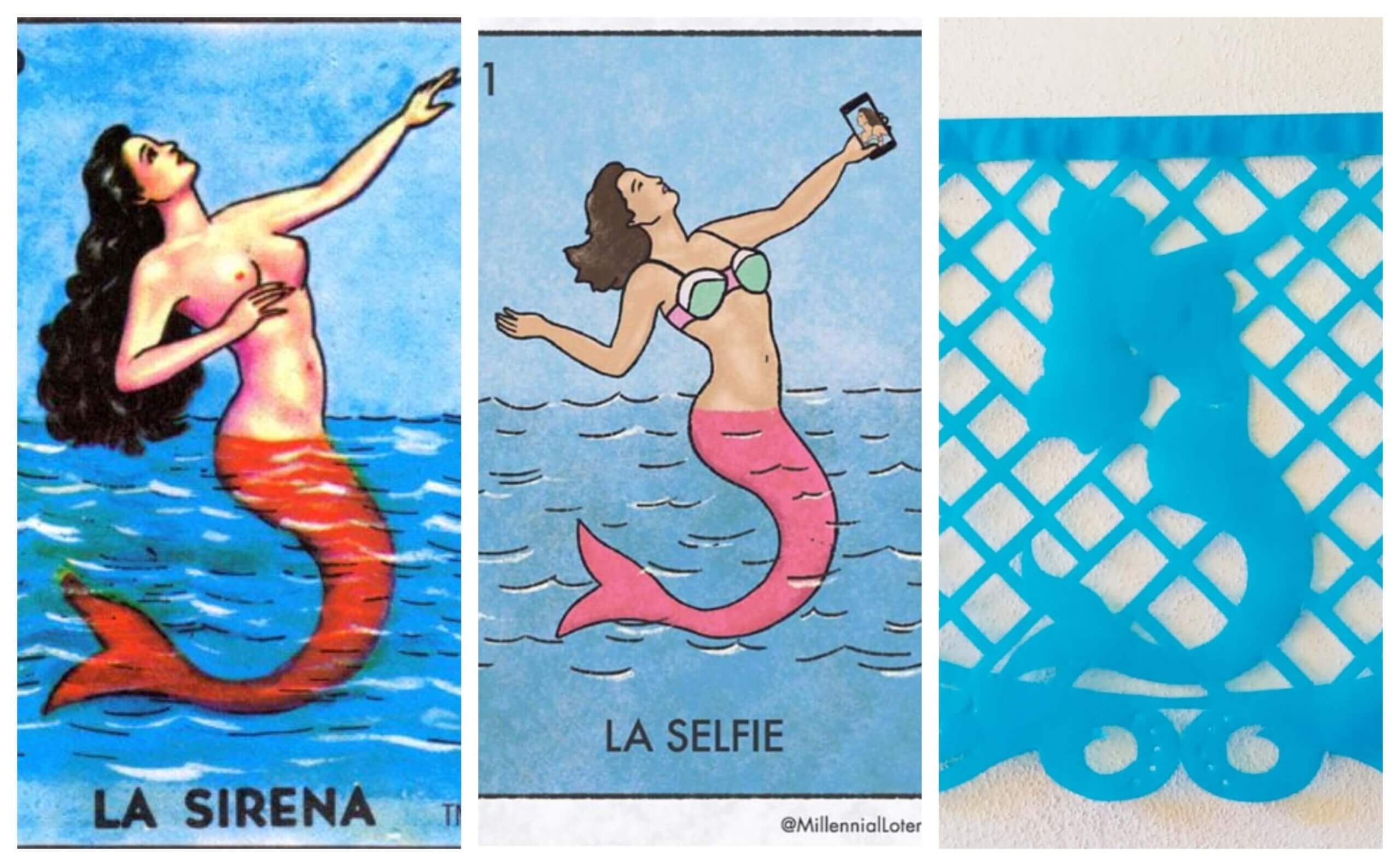 The first mermaid I ever saw in ‘real life’ was Daryl Hannah in the movie “Splash”. Yes, I realize that she wasn’t an actual mermaid, but my 12 year old brain was absolutely certain that she was ‘the real deal’ and I was enchanted!

‘Madison’, as Daryl was called, was a beautiful woman with flowing blond hair that always managed to cover her boobies and as soon as she hit the water she turned into a beautiful mermaid. One thing that never made sense to me even as a kid (cuz it was straight up bullshit) is the fact that she was only allowed out of her ‘Under the Sea World’ for 7 days with Tom Hanks. Total bullshit. Anyway, she’s my mermaid muse…for now 😉

As it turns out I wasn’t the only one entranced by mermaids, or ‘sirenas’, as they are known as in Spanish. The first tales of mermaids were told in ancient Assyria over 3,000 years ago when (allegedly) a goddess named Atargatis transformed herself into a mermaid out of shame. She accidentally killed her human lover and was so upset that she flung herself into the sea – possibly attempting suicide. But since she was a goddess and suicide isn’t really their thing, this was the punishment that she forced upon herself. Tough broad.

In early Greek mythology, mermaids were associated with tragic events like floods, shipwrecks and drownings. Sirens (sirenas) would lure in unsuspecting sailors with their sexy music and sensual voices that floated with the winds across the waters. When the sailors redirected their ships to investigate further, they found themselves slamming into rocky islands, sinking their ships and generally experiencing a shit ton of peril. These sirens were talented, clever and a little crazy, like me.

The first historical reference to sirens/sirenas/mermaids was in 1493 when Christopher Columbus was exploring the Caribbean islands. He noted that he saw three ‘female forms’ rise high out of the sea. Now of course, The History Channel wants to make this whole event seem a lot less sexy by throwing “facts” into the mix. Here’s what they say in 3 short and shitty paragraphs…

“Italian explorer Christopher Columbus, sailing near the Dominican Republic, sees three ‘mermaids’ – in reality manatees – and describes them as “not half as beautiful as they are painted.” Six months earlier, Columbus (1451-1506) set off from Spain across the Atlantic Ocean with the Nina, Pinta and Santa Maria, hoping to find a western trade route to Asia. Instead, his voyage, the first of four he would make, led him to the Americas, or ‘New World.’

Mermaids, mythical half-female, half-fish creatures, have existed in seafaring cultures at least since the time of the ancient Greeks. Typically depicted as having a woman’s head and torso, a fishtail instead of legs and holding a mirror and comb, mermaids live in the ocean and, according to some legends, can take on a human shape and marry mortal men. Mermaids are closely linked to sirens, another folkloric figure, part-woman, part-bird, who live on islands and sing seductive songs to lure sailors to their deaths.

Mermaid sightings by sailors, when they weren’t made up, were most likely manatees, dugongs or Steller’s sea cows.”

MANATEES and SEA COWS? SEA COWS?!?! How dare The History Channel!! Back to historical fantasy now…

The infamous 18th Century pirate, Blackbeard (whose real name was Edward Teach – lame right?) wrote in his journal that he instructed his crew to avoid certain charted waters known to be ‘enchanted’ with mermaids looking to bewitch ships and steal their bounty of riches…something Blackbeard was not going to tolerate. Not even from hot chicks.

It took writers and historians another 100+ years before mermaids were considered enchanting and waaaaay less dangerous than pirates thought. In 1836, Hans Christian Andersen penned the now well-known fairy tale, “The Little Mermaid”. The book depicted mermaids as sweet and loving non-thieves who just want to become human. This tale has since been depicted in operas, paintings, books, comics and of course, films. Yes, THAT Little Mermaid is THAT old.

In 1989, Walt Disney Pictures released their full-length animated film based on Andersen’s tale. The appropriately titled “The Little Mermaid” movie was “Splash”-level cool for 3 reasons:

I know there was a 90’s Mermaid movie with Cher and another teen queen one with Emma Roberts or some shit, but those don’t count. If we’re talking about the most epic portrayal of mermaid-ness in a movie since “Splash” that would, of course, be “Zoolander”.

Ben Stiller strikes his ‘Blue Steel!’ underwater pose as a MerMAN to deliver cinematic greatness! “Moisture is the essence of wetness and wetness is the essence of beauty.” Truer words were never spoken. Check it…

Classic. “I got the black lung, Pop. (Cough)” OK, no more digression. I hear there was a 17th installment of “The Pirates of the Caribbean” that involved some mermaid on merman shit, but who’s got the time? Not Johnny Depp.

The last point about mermaids/sirenas that I want to address is the iconic La Sirena image that belongs to the classic Mexican ‘bingo-like’ game called La Loteria. You have seen this image many times, but probably never assumed the image (or the game for that matter) had much significance. Well, it’s significant as shit and here’s why…

Direct from Wikipedia, yo…”Lotería is the Spanish word for lottery. The game originated in Italy in the 15th century and was brought to New Spain (México) in 1769. In the beginning, la lotería was a hobby of the upper classes, but eventually it became a tradition at Mexican fairs. Now it is played by many Mexicans at home or in cantinas.

It is a traditional game of chance, similar to Bingo, but using images on a deck of cards instead of plain numbers on ping pong balls.  The deck of cards is composed of a set of 54 different images, each one in a card. To start the game, the caller (cantor, or singer) randomly selects a card from the deck and announces it to the players by its name, sometimes using a riddle instead of reading the card name.”

#6 would be La Sirena. Here is the calling of the card…

Numero Seis! La sirena! (the mermaid) “Con los cantos de sirena, no te vayas a marear.” = Don’t be swayed by the songs of the siren (In Spanish, sirens and mermaids and their songs are synonymous). So don’t be swayed.

Finally, my boyfriend, Channing Tatum has committed to an Imagine Entertainment produced “Splash” remake where the leading roles are reversed and he is a MerMAN leaving his Under the Sea world to go find his childhood non-swimming lover girl in NYC. This proves the importance of Mer-People if he is investing his time, energy and beautiful face for this mission. God bless him. And Ron Howard. Coming to screens 2020-ish.

And I’m sure my sweet Channing will sing the immortal words of the Jamaican crab, Sebastian ….

So with all of the Splashy Mermaid obsession going on, we decided to collaborate with our papel picado artists in Puebla to create both paper and plastic The Little Mermaid / La Sirenita papel picado! Get your choice of material and color schemes for your next Fish Fry, Cinco de Mayo event or kid’s birthday party!

Experience México every day with this Mermaid Inspired Papel Picado! Buy Yours Here…

Funny S#*t You See In México

My Story / The Actual History of Papel Picado Flags

What’s the Deal With These Badass Mariachis?