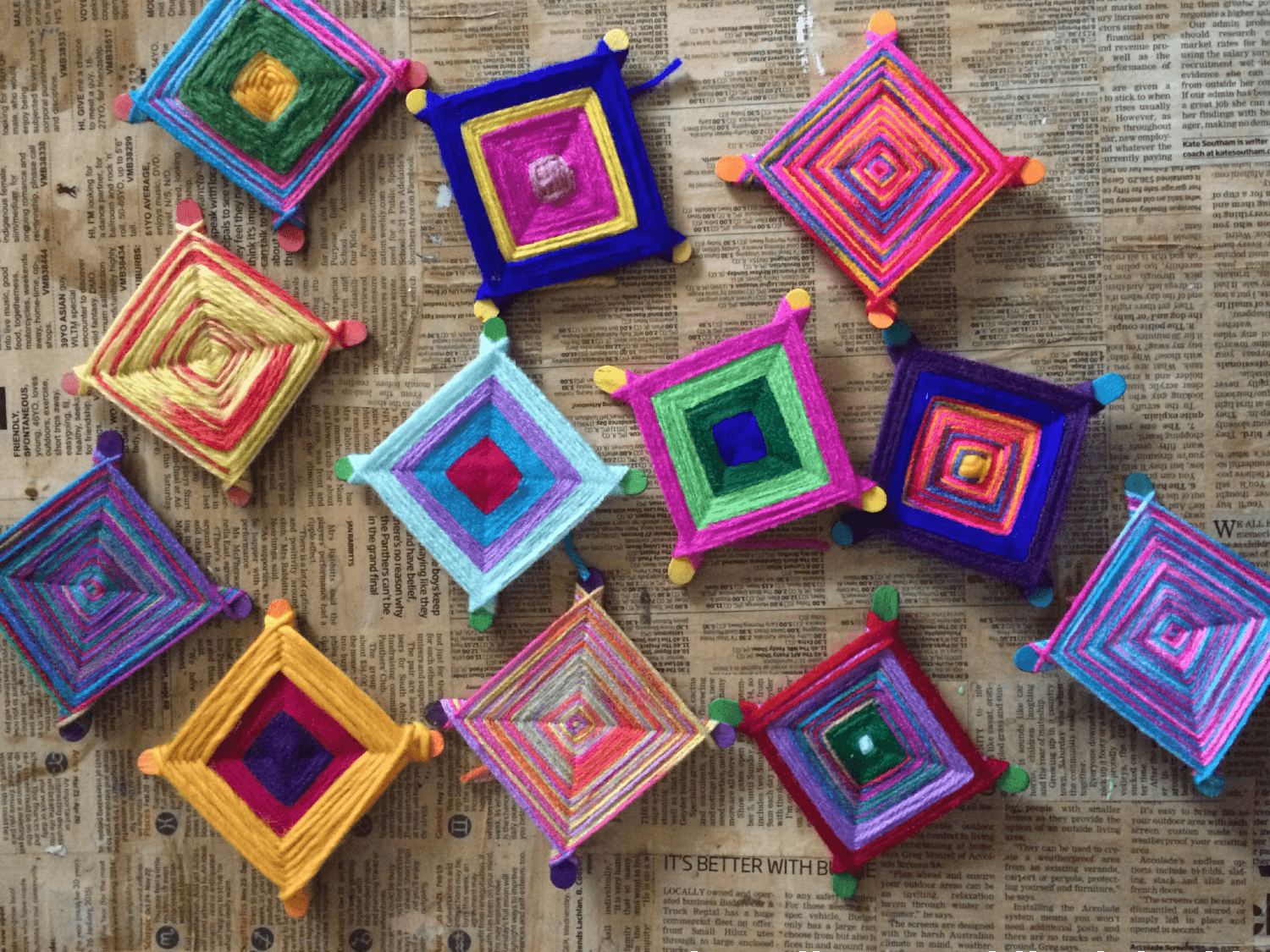 Y’all probably know that I am a big fan of Mexican Pueblos Magicos and of Papel Picado. The one town that puts these together well is Sayulita, Nayarit just north of Puerto Vallarta on México’s Pacific coast. In fact, Sayulita is most known for its rainbow rows of papel picado. So much so, that locals call the main avenue “Selfie Street” because so many touritsts ‘selfie’ themselves under the never ending rows of the colorful flags that line the main drag.

I still haven’t gotten to the bottom of why Sayulita digs papel picado as much as I do, but recently the town has taken on a new project that caught my eye…In addition to lining the streets with waves of papel picado they have added a massive amount of Ojos de Dios to color their sky! “WTF are Ojos de Dios?” you ask! Welllllllll…

Once upon a time in a land far, far, OK fine, right up the street from us…Huichol Indians lived in peace and harmony. The Huichol (pronounced: hwee-chol) are a tribe of Native Mexicans that descended from the Aztecs in the western/central part of México. A small (20,000), but still strong tribe, the Huichol primarily hang out in the Sierra Madre mountains within the neighboring states of Jalisco (home to Puerto Vallarta) and Nayarit (home to Sayulita). Rumor has it they fled to the mountains to escape the Spanish Conquest carnage and some still live very isolated lives in the mountains of Zacatecas and Durango. #social distancing

?? Shop for Papel Picado at TexMex Fun Stuff on Amazon ??

Anyhoo, when the Spaniards came to conquer México’s land, indigenous folks and generally cause a big shit show, they couldn’t properly pronounce this tribe’s given name. Shocker. The tribe name was actually ‘Wixaritari’ which means ‘healer’ in their original language, sooooo they shortened it to Huichol. Not really Spanish, but a little easier to say.

This tribe is known for 3 things: peyote, bead weaving and Ojos de Dios. Peyote sorta goes without saying….it’s basically trippy shit from a hallucinogenic cactus. The intricate bead work is a blog post for another time because it’s sexy as hell.

Ojos de Dios are decorations that hang from windows, trees and signs across México. They are commonly referred to as ‘Mexican Mandalas’ and are similar to Tibetan Mandalas because these colorful ‘sticks and yarn combos’ symbolize the Eye of God in both groups.

The Huichol believe that these more or less ‘religious instruments’ protect their young. In fact, it is tradition that when a baby is born, the father begins weaving the first layer of that child’s Eye of God by winding colorful yarn around a simple wooden cross to figuratively tie together all of the earth’s elements (land, air, fire, water) and directions (north, east, south, west) so that the newborn will be protected in all ways by all the Huichol gods. Got it? It’s a sweeter gesture than giving a baby a shitload of diapers at a baby shower…

Each year the father weaves an additional layer of the Eye/Ojo on the child’s birthday and provides the completed Eye/Ojo to the child upon their 5th birthday. This is a big time Rite of Passage for Huichol children. It basically means they are on their own…well, not that dramatic…but these dudes believe that after the age of 5, the child is no longer under the protection of the father, but of God(s).

This gang really embraces nature/earth/multiple gods and the like. And the number 5 holds a massive significance to them. For example: There are 5 points on their map, 5 colors of corn, 5 colors of peyote, 5 colors are used in each Eye/Ojo and there are 5 rain gods. Let’s face it, the Huichol really like the number 5! #cinco

At the age of 5, the child throws his or her Eye of God into the sea as a sacrifice to the gods and as a “Gracias!” for their protection. This also signifies that the child is now old enough to protect him or herself. The age of 5 seems a bit young to “Let the damn kid roll on his own!”, BUT the Huichol usually marry between the ages of fourteen and seventeen, so there’s not a lot of time to be on their own anyway.

BTW, marriages are arranged by the parents when the children are very young. I’m guessing age 5? #damnthatsyoung

The Ojo de Dios symbolizes the ability to see and understand unseen things, focusing their worship on nature and the earth.

As with all ceremonial items made by the Huichols, colors are important and each is identified with a particular god or sacred object. The original 5 colors in each Eye of God/Ojo de Dios are blue, black, white, red and purple…

Blue represents the sacred lagoon of Chapala and Rapawiyene, the god of rain and water. Maybe I should have had more respect for Rapawiyene when I danced like a crazy women on Lake Chapala in Jalisco. Ayayay. #notproud

Black represents the Pacific ocean…which makes sense because Jalisco and Nayarit are both on the Pacific. It also represents Tatei Armana, the Mother of the Sea. And finally it represents (rather counterintuitively) life. Seems like a lot to represent, but hey. #dontjackwithblack

White represents the wind and clouds, but on the downside it can also be associated with death (again, super counterintuitive).

Red represents Parietekúa, which is the peyote god. I’ve never smoked peyote and that is probably one of my few good life decisions.

Purple is all encompassing and represents the Huichol as a society. Lots of Ojos de Dios have other colors obviously, but these 5 are of particular importance to the Huichol. Everything else is just pretty.

Tradition has evolved enough for this art form to become a money maker.?? Huichols now make Ojo de Dios patterns into earrings, wall hangings and ornaments which are both pretty and thought to bring protection against evil, danger or disease. Hey, might as well make some cash as you spread color and joy. And there is A LOT of color and joy in Sayulita! ? ?

According to a local Spanish newspaper, educational campuses, senior groups, independent artists, shops, and associations from Sayulita decided to showcase this marvelous art form all over the town in honor of the 9th Annual Dia de los Muertos celebration. All of these groups participated in setting up altars for Dia De Muertos and participated in the design, creation and placement of more than 16,000 “Eyes of God”. All of this was to get Ojo de Dios into the Guinness Book of World Record in late 2019! #failuretolaunch #yesImserious

I mean, seriously! There were 16,000 of them and they didn’t score?! #chinga #timeforresearch

So I went to the Guinness Book website to see if this had ever been attempted before and there is no record currently set. Based on the submission rules, it is probable (but not confirmed) that they submitted the paperwork too late to get in for the 2019 edition. Which is to say that if you submit paperwork “in time” the registration is free. I’m guessing they didn’t have enough funds for late submission. But still, all 16,000 were done by the hands of the Sayulitans – pretty impressive! #2020?

Nevertheless, the good people of Sayulita gave it the old college try and will hopefully have the opportunity to try again during the upcoming Day of the Dead festivities. May 2020 be the year that Sayulita and Ojo de Dios go down in the record books! Because 2020 owes us something, goddamnit! #freaking2020

Mexican Milagros – Because We Could All Use Some Miracles Right Now!