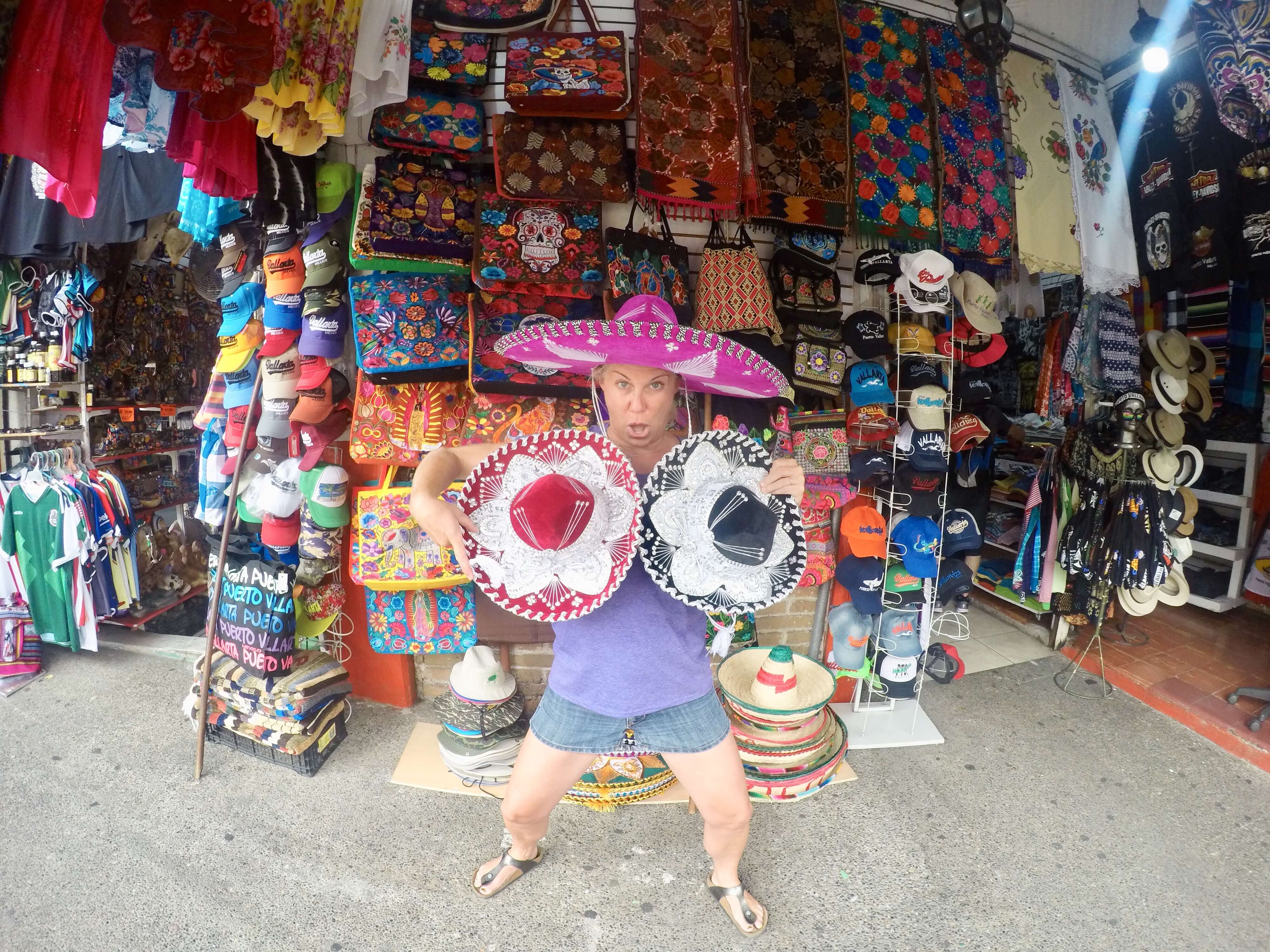 I’ll be honest. I freaking loved Speedy Gonzales as a kid with that “Arriba, Arriba, Andale, Andale” shit! Little mouse with a big ass hat that he never lost even when he was zooming around at 100 km/hr. He was my first introduction to rodents, Mexican culture, Spanish slogans, hot nasty badass speed and of course, Sombreros.

Speedy was a cutie and all, but the history of Sombreros in México goes back over 500 years and is steeped in tradition, functionality and rebellion. Sombreros are those wide brimmed hats made of straw, felt or velvet that are now an icon of Mexican culture. For reals, you show up at any party, wedding or funeral wearing a Sombrero and you’ve just turned it into a full-blown fiesta.

The word Sombrero is derived from the Spanish word for shade which is ‘sombra’. The direct translation for El Sombrero then is…’The Shadower’. See there?!

There are three different countries/people claiming to have invented this sun-defying Mexican symbol of bad-assery. The only consistency between these 3 possible backstories is that the Sombrero was made for one specific function: to shade the person wearing it from the intense heat of the sun.

Mongolians, Spaniards and Mestizo Cowboys all claim to have invented the Mexican Sombrero.

CLAIM #1 – LAMENESS ALERT – The first people to declare that they invented the Sombrero were the Mongolians back in the 1200’s. Most Mongolians were horse riders…shepherds or nomads or both. So OK, I get that they needed wide brimmed hats prior to the invention of Coppertone, but let’s take a look at what they are claiming.

Back in the day the Mongolians had some crazy ass hats. Some were wide brimmed and most were completely out of hand pointy, but I’m going to go ahead and strike their claim from the record. Seriously take a look at these examples…they’re not even close to the Sombrero fantastic-ness we all love today!

CLAIM #2 – The Spaniards (as per usual) are much more likely “founders” of the Sombrero. Allegedly in 1400’s Spain, elite men wore Sombreros made of plush felt while the peasants’ Sombreros were made of straw. When the Spanish invaded Mexico in the 1600’s, they brought along their wide-ish brimmed hats. You are going to hear from HistoryofHats.com right now because they know what they’re talking about…

“Even as far as 17th century, people from Spain used to wear hats called ‘Sombrero cordobés‘ (translated as ‘wide-brimmed hat’), a traditional hat from the Spanish territories of Córdoba and Andalusia. This hat is defined by the flat crown that is between 10-12cm high, and a relatively short and perfectly flat brim that can be 8-12 cm wide. It is believed that the Mexican Sombrero was created after Spanish immigrants brought Sombrero cordobés to the New World.” – HistoryofHats.com

CLAIM #3 – REALITY ALERT – Mestizo (People of European and Mexican Indigenous mixed decent) farmers and ranch hands from central México came up with Sombreros. The hats they wore were made out of straw and were wide enough for everyone in the fields to protect their head AND shoulders from the sun. That’s how big they were. These hats also had upturned rims that would deflect water while trotting around the mesa, herding cattle or whatevs. HistoryofHats.com has this explanation…

“Sombrero hats were created out of necessity in the early history of the Mexican culture. Faced with the strong sun during an entire year, both native residents of Central America and European immigrants who started settling it during the 17th century and later, quickly strived to find easy ways to provide protection against sun and elements in the territories that were then considered as very desolate, harsh and hard to work in. One of the most popular solutions for protection of the sun were hats imported from Europe, but they were viewed as insufficient against strong Mexican sun, especially for workers who had to stay outside during an entire day. Mexican natives and immigrants soon started building hats with wider and wider brims, and those hats quickly became an iconic clothing accessory for the whole nation.” – HistoryofHats.com

Now For the Rebellion Part

Straw sombreros with a wide upturned brim and a pointed top were made famous by Emiliano Zapata in the late 1800’s. Viva México! Zapata was a prominent leader in the peasant revolt of the Mexican Revolution. Prior to the revolt he was a farmer, a rodeo bad ass and an agricultural entrepreneur from the state of Morelos. To say the least, he knew a thing or two about headwear for long days in the sun. His preference for the super wide, straw, pointy-topped style charro hat led everyone in México to just start calling that style ‘The Zapata’.

From Wikipedia: “General Zapata’s dress until his death was a charro outfit: tight-fitting black cashmere pants with silver buttons, a broad charro hat, a fine linen shirt or jacket, a scarf around his neck, boots of a single piece, Amozoqueña-style spurs, and a pistol at his belt.”

We just mentioned ‘charro’ three times. What the hell are ‘charro’ hats and outfits, you ask? Charros are cowboys. Simple. Charro hats and outfits are just the style of cowboy/ranch hand headwear and clothing. Charro beans are cowboy style beans…but that’s another story.

So whether the Spanish brought the Sombrero to México or today’s version really began with central Mexican farm folk, Sombreros have been kicked up several notches in creativity, function and style thanks to the Mariachis and Charros of Guadalajara. Together they are credited with enlarging and bedazzling the shit out of this already big hat and making it a true symbol of Mexico.

Charros / Mariachis know how to ROCK the Sombrero.

The Charros of Guadalajara were the first to create the hat that pretty much everyone envisions when they think of Mexican Sombreros. They were the horsemen relying on the Sombrero to protect them from the sun while adding a little bad-assery to their wardrobe. However, the Mariachis of Guadalajara are ultimately responsible for going really over the top with this awesome headpiece. We’re talking elaborate, colorful, decorated shit, here. Rhinestone cowboy stuff.

The outfits that Mariachis wear today are actually called Charro Suits and any self-respecting Mariachi never leaves home without his/her Sombrero. To keep them from blowing off in the wind or while they are rocking out, they tighten up the ‘borboquejo’, which is Spanish for chin strap.

You can find Charro and Zapata style Sombreros for sale in most mercados (markets) throughout México. The picture above is me causing trouble in the Mercado Municipal Rio Cuale in Puerto Vallarta. I bought this fancy pink Charro Sombrero for about $20 USD. I think they just wanted me to leave. Wait, no…they definitely wanted me to leave.

🇲🇽 Buy a Sombrero on Amazon. You Know You Want One! 🇲🇽

Sombreros are still handmade in México

This video is in English and it’s awesome so watch it, yo. That way we don’t have to type everything they say 😉

Sombreros are still crafted by hand today, but there are subtle differences in their design that showcase the level of artistry and inevitably impact the price. My $20 USD pink bejeweled beauty was made by the Pigalle Sombrero Company and combines pre-cut patterns that are glued onto the brim with hand sewn threading that weaves the patterns across the top and bottom. Sombreros are commonly emblazoned with beads, sequins, thread, sparkles and other flashy decorative elements.

I’ve been traveling through México for years and have found that most types of arts/crafts are known for coming from certain towns. Examples are Taxco for sterling silver, San Salvador Huixcolotla for papel picado, León for leather and Tultepec for fireworks. Sombrero artists/manufacturers aren’t located in a specific city, but more of a region throughout the states of Jalisco (hence the Guadalajara connection) and Guanajuato.

The story behind the Mexican Hat Dance will make you fall in love.

The Mexican Hat Dance (Jarape Tapatío) is the story of a young man trying to gain the attention of a beautiful girl. In an act of pride and commitment, he throws the most valuable thing he owns to the ground as a symbol of his love to her. In front of her feet laid his Sombrero.

She is so overcome by his romantic gesture that the two engage in a dance of courtship around the Sombrero. The Jarape Tapatió evolved into a Mexican folk dance which is now known as the National Dance of México. To keep with the tradition of the young couple, the dancers do not touch while dancing, allowing the Sombrero on the ground between the two…to keep them at a good safe/virginal distance.

As the song and dance conclude, the woman picks up the Sombrero and the couple disappears behind it for a few moments leaving the crowd to wonder how much tongue is going on behind the two foot wide kissing booth.

And by the way, Tapatió is the word used for a native of Guadalajara…so we have to presume that this couple and resulting tradition is originally from Guadalajara, Jalisco. That and tequila…Ayayayay!

Now that you have decided that you need one for yourself or a bad ass dog, here’s some ballpark pricing…Deuce is currently showing off a colorful, child-size velvet bedazzled wonder that we bought for around $12 USD at the PV mercado. Now all we have to do is convince him that wearing it is a good idea! Arriba, Arriba, Deuce!!! Andale, Andale!!!

Dance of the Flyers and Birdmen vs. MayPoling and Pole Dancing

Finding La Sirena and The Little Mermaid Under the Sea﻿