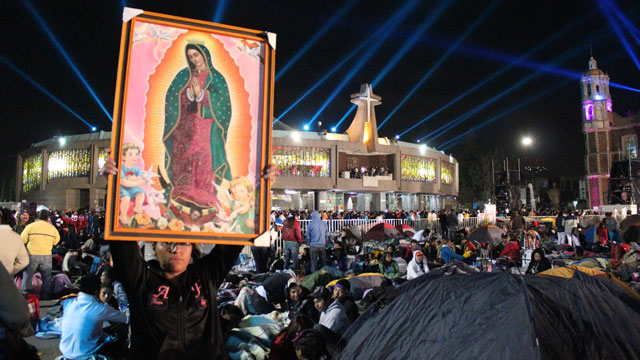 I see this Virgin of Guadalupe broad everywhere. She is insanely iconic to Mexican culture…but why? The Virgin Mary as the Mother of God or at least the female expression of God is a Christian concept. But Catholics in Latin America take it to another level. So how did this virgin become such a big part of Mexican religious and national identity?

“Iconic” often describes something or someone that is considered symbolic of something else, like spirituality, virtue, or evil and corruption. The iconic Statue of Liberty is a symbol of freedom. Michelangelo’s iconic statue of David was supposed to represent anatomical perfection. In Christianity, the Virgin Mary is an iconic image of purity and closeness to God.

Not only has Mother Mary gone mainstream as an image, but her day of celebration (Dec 12) is the most important holiday of the year in México! I mean, really… it kicks off a 3-week long wretched excess party during the holidays which finally ends on Three Kings Day on January 6. This party streak is also known as: The Guadalupe-Reyes Marathon (blog post on that to follow).

Also, there are many versions of her story and how she became the ultimate Goddess and Madre of México…One chick, one day, one miracle in Central México almost 500 years ago…here we go, yo.

Long history short: According to tradition, the Virgin of Guadalupe appeared to an indigenous peasant (way more native/Aztec than Spanish) named Juan Diego in central México on Dec. 9, 1531. Juan Diego was minding his own business when the Virgin came from out of nowhere and asked that a shrine be built in her name on the spot where she appeared. This happened to be on Tepeyac Hill, which is now in a northern suburb of México City (The Beast).

After this apparition, Juan Diego traipsed his way down to the Big Cheese Catholic bishop, also named Juan, to tell him about Our Lady’s request. Juan De Zumárraga was the first bishop and archbishop of México and he just straight up didn’t believe the other Juan. #notcredible

In fact, Juan De Zumárraga (or J De Z as we will call him) demanded a sign before he would approve construction of the shrine/church/basilica situation. So poor dejected Juan Diego just went back home. Three days later (December 12), Juan Diego’s uncle lay dying and so he was sent back to the church to get a priest to read his uncle his last rites.

Well, lo and behold, if Nuestra Señora didn’t show her ass up again! She reappeared to Juan Diego and ordered him to collect roses in his cloak and take them to J De Z since he was heading there anyway. So Juan Diego took the roses to the bishop and when he opened his cloak, the roses fell to the floor and magically the image of the Virgin was imprinted on the inside!

That seemed to be all the proof that J De Z needed, so construction of the basilica in the Virgin’s name began on the spot where she appeared. Not sure of what became of Juan Diego’s uncle though.

FUN FACT: Juan Diego’s actual cloak with the image is still on display in the Basilica de Guadalupe. For the record, originally only the figure of Mary was on the cloak. Later the gold rays, the baby angel beneath her and the glowing warm orangey-red light surrounding her was added-probably by Bishop J De Z. It has never been restored yet it looks just as it did in 1531 after 488 years!

According to author Rosemary Reuther, an American feminist scholar and Catholic theologian, who wrote

“Goddesses and the Divine Feminine: A Western Religious History” (book available on Amazon)…this situation in México is likely a copy cat. It is well known that Spanish priests were sent to the ‘New Spain’ to endear/force upon Catholicism (and its biggest heroine…the virgin/Mary/Mother of God) to the indigenous natives of México.

The central part of México had predominantly been ruled by Aztecs when the Spanish successfully invaded. The Aztecs believed in a myriad of gods, not one god from a mother who never actually had sex with anyone. And Juan Diego was likely Aztec. Here is why Reuther thinks this story is more or less a nod to a previous event that, according to tradition, happened in the region of Extremadura, Spain centuries earlier…

Reuther explains that a small wooden statue of the Virgin was carved by The Episcopal, Luke right after Jesus (Son of the Virgin Mary) died. St. Luke had sculpted this statue of the Virgin and was laid to rest with it in Antioch, Turkey. Someone at some point dug into St. Luke’s grave and took the Virgin sculpture with them to the Pope in Rome. #graverobber. The next Pope inherited her and then eventually gave her to Leander the Great who was hanging out in Seville, Spain circa 7th century.

Circa 8th century, the city of Seville was captured by the Arabs/Moors of Islam and so a whole slew of priests took a bunch of Catholic relics, including Luke’s statue, and buried them in the hills of Extremadura, near the river of Guadalupe. They hid it so well that no one could find it for centuries. Oops.

Then one day, a shepherd named Gil (yeah, seriously) was herding his cows on a delightfully crisp mid-14th century morning when he realized that one of his cows was missing.

Gil immediately left the flock to look for it and discovered the dead body of his good buddy next to the banks of the Guadalupe River. Gil was devastated and all, but decided to take advantage of the cow’s skin. When he pulled out his knife to score a little hide, THE VIRGIN APPEARED TO HIM AND SAID,

“Don’t be afraid. I am the Mother of God, Savior of the human lineage. Take your cow and take it to the herd with the others and then go to your land. You’ll tell the clerics what you’ve seen. Tell them from me that I’m sending you there, too. Let them come to this place where you are now. Let them dig where the dead cow was, under these stones: you will find an image of me. When they take her out, tell them not to move it or take it from this place where it is now, but make a box in which they put it. Time will come that in this place become a very remarkable church.”

Needless to say, Gil did just that and not a damn one of those clerics believed him. #soundfamiliar? Anyway, he was super bummed and his day was about to get worse…Gil arrived home to find that his firstborn son had died. CHINGA! His entire family and village were at his house mourning this loss when Gil, who couldn’t take much more of this shit, dropped to his knees and begged Our Lady with much devotion:

“Ma’am, you brought my cow back to life. Let’s do this again with my son and we’ll show all these motherfuckers how powerful and miraculous you are.” OK, I took some serious liberties with that one, but the original quote is way too long.

Before the stunned gaze of all those present, Gil’s son rose, as if awakening from a dream, and everyone marveled at the great miracle. Then Gil told them about the whole cow situation and how the Virgin appeared by the river and how she wants a church in her honor to be constructed in that exact place.

And, oh by the way, she also mentioned that they should dig for the sculpture that St. Luke carved and that the clerics of Seville buried so many years before. The whole village ran to the Guadalupe river and started digging.

Sure enough, they found her statue plus the other relics and documentation that were in a marble casing (almost like a mini casket). Off they went to show and tell the bishops in the nearby mid-size town of Cacéres! This time Gil was TOTALLY CREDIBLE.

The mass construction of the basilica in The Virgin’s name, (which ended up including a monastery, a school, chapel, etc.) ended up creating a village of workers around it. They decided to name their new town Guadalupe since the Guadalupe River ran through it and everyone had pretty much agreed that they should call the shrine “The Virgin of Guadalupe”. Not extremely original, but certainly sensible.

If you remember from your history books, Hernán Cortés invaded México in the early 1500’s when his troops overthrew the Aztecs in their capital city. Welp, Cortés and his some of his men spent a great deal of time in the Extremadura region of Spain and had become enormous devotees of the Virgin of Guadalupe prior to the invasion of México.

Reuther contends that some of Cortés’s army spent time in the Tepeyac hood while preparing to take the Aztec capital (now Mexico City) in 1521. It is probable that while they were there, the story of the original Virgin of Guadalupe was bastardized into a Mexican version, whereas the apparition showed herself to an indigenous man so as to get the Aztecs on board with the “miracle of Christianity.” #itworked

Another similarity between the two Virgins is the pilgrimage by their devotees to their respective sacred places. People bike and walk hundreds of miles to her basilica in México City and to “satellite” basilicas all over México to pay respects and ask for miracles on December 12 every year. The Virgin of Extremadura welcomes visitors all year long who come from far and wide to show their devotion. #Cortés

WeAreLiveLatin.com is a blog about all things fabulously Mexican and they phrased this phenomenon better than I ever could…

“The icon of Nuestra Señora de Guadalupe was used by father Miguel Hidalgo as he launched the fight for independence. The image of the Virgin has since been an important image in México’s struggle for freedom and as a patriotic symbol. Revolutionaries like Zapata always carried a flag with her image as they went into battle, and later, when they marched triumphantly into México City.

She is present in all aspects of Mexican life, and her image has become synonymous with México. In places like truck stops, bus stations and automobile garages, there are small shrines to the Virgin where people can pray. In many churches and shrines, instead of a crucifix there is an image of the Virgin. Her image is deeply etched into the consciousness of the Mexican people; so much so that it has even become a form of kitsch. She can be found on t-shirts, calendars, towels, tattoos, cups, and even bank checks.” So there.

We Are Live Latin

You know you’re an icon when another icon imitates you for her pregnancy and baby pix!

And now for some blasphemy

OK, you may or may not have noticed that I am not super Jesus-y/religious-y/Believer-y. My thoughts on all of the above are this: this story is as ridiculous as the actual Christmas story. Of course it is. However, this woman is so important to the land and culture that I live in now that I don’t dare question the validity of it all around my Mexican friends. That would be sacrilege to the level of un-friending, and not just on FaceBook.

“BUUUUUUUUUT!,” as my dear Mexicana bestie, Julissa says…every sacred situation deserves a good meme. So here we go in Español…

Did I manage to explain why the Virgin of Guadalupe is a bad ass broad? Good. The End.

S#*t You See While Road Tripping Through Mexico.