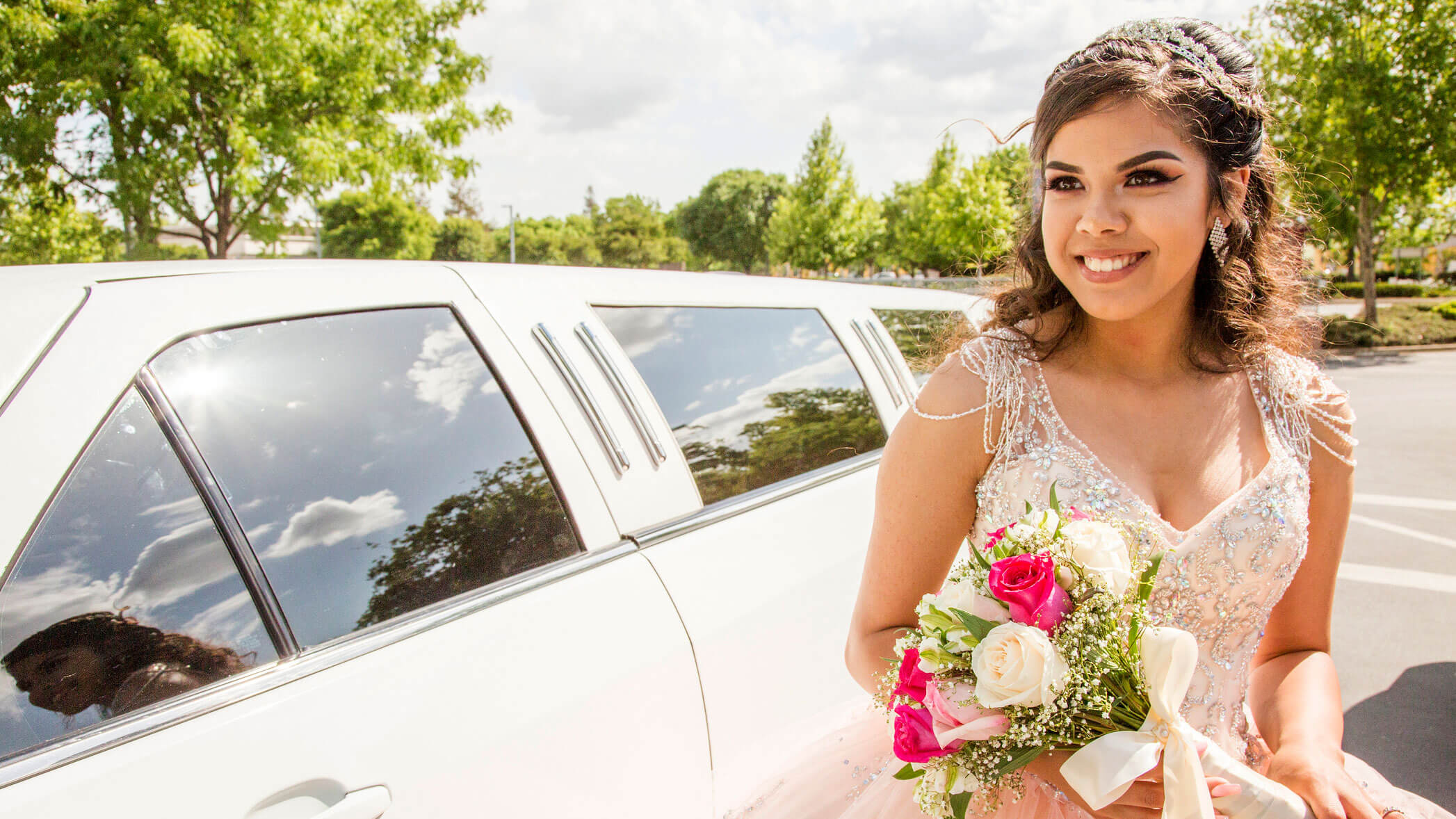 Every single Saturday evening in any given town in México you will see a limousine full of teenagers dressed to the nines hanging out of the sunroof screaming and singing and waving at onlookers. Seriously, they look too young to be going to Prom and Prom is only a May/June thing anyway, so what’s the deal?

Welp, that there is a little tradition we like to call “Fiesta de Quince Años”. It means “Party for the 15 year old” in Spanish and just kidding…there is NOTHING little about it. A lot of teens celebrate ‘Sweet 16!’ in the United States. This is sorta like that, just a year younger and WAAAAAYYYY more over the top! BTW, it is pronounced ‘keen-sey-ah-nyair–uh‘.

When I turned 15, my parents winced about putting on a taco and ice cream party for 20 people, never mind a whole Cinderella fantasy! For reals, these things take a full year to plan…like a wedding. Basically when a little girl turns 14 it’s time to get the party planning going full steam ahead. Allow me to share what I was doing in my 14th year of life. It looked something ridiculous like this…

Total Breakdown of this Event

Quinceanera-boutique.com is a one stop shop for all things regarding this tradition. Here’s their take on this teenage Latina/o phenomenon…

“In the Mexican, Puerto Rican, Cuban, Central and South American traditions, the custom can be referred to as a Quince (XV) Años, a quinces, a Quinceañera, a Quinceañero or a Fiesta Rosa. The Quinceañera celebration traditionally begins with a religious ceremony. A reception is held in the home or a banquet hall. The festivities include food and music, and in most, a choreographed waltz or dance performed by the Quinceañera and her Court.”

***Allow me to interject before continuing with this big explanation. The word ‘Quinceañera’ is the word for both the celebration AND the 15 year old girl. Now, when a family celebrates a boy coming of age they call the event AND the 15 year old boy ‘Quinceañero’. *** Back to quinceanera-boutique.com‘s kick ass quote…

“It is traditional for the Quinceañera to choose special friends to participate in what is called the Court of Honor. Usually, these young people are her closest friends, her brothers, sisters, cousins – the special people in her life with whom she wants to share the spotlight. The Quinceañera’s Court of Honor can be comprised of all young girls (called Damas), all young men (called Chambelanes or Escortes) or a combination of both boys and girls.”

The Quinceañera traditionally wears a ball gown, with her Court dressed in gowns and tuxedos. Guests usually receive small tokens (cápias) to commemorate the celebration.”

This is Cinderella stuff!! The closest thing I ever got to at that age was going to Prom…twice. AND I had to wear the same $100 dress both years! PROOF:

But enough about my teenage angst. There are so many rituals in a typical Quinceañera that I can’t even list a majority of them. Let’s not even get into the First Doll, the Last Doll, the Changing of the Shoes, the Kneeling Pillow or any of that jazz.

Suffice to say, there is a lot of pomp and circumstance that occurs during one of these ceremonies/parties. I’m writing about it because I’m all about grand fiestas and Quinceañeras are the fiestas that Latin American parents throw the most money at!

Seriously, more pesos are spent on Quinceañeras than on the girls’ actual weddings! Probably more than MY wedding! Follow the money…

There is BIG Money in Quinceañeras

Ain’t no joke. Quinceanera.com has a list of the Top 10 things a Quince’s parents will spend a small fortune on. Luckily, Godparents or ‘Padrinos’ are expected to shell out some cash or sponsor certain expenses. With the exception of an open bar (which has strangely been left off this list), anyone who has had a traditional wedding may find these expenses VERY familiar:

Clearly the Reception is More Important than Ceremony

I feel that ‘party’ is more important than ‘prayer’ because I’m a heathen. That said, How Stuff Works totally agrees with me and lays out the play by play of these events really well…

“Although its emphasis is more on the party than the prayer, the Quinceañera starts at the local Catholic church. Before any birthday cake is cut, the quince girl attends a special Mass in which she reaffirms her dedication to God and receives a blessing from the priest. Afterward, the Sweet 15 reception gets underway, typically involving some combination of choreographed dance sequences***yes you read that right***, limousine arrivals, sumptuous spreads of food and desserts and an official presentation of the quince girl to fiesta attendees. Similar to cotillion and debutante traditions, Quinceañeras serve as young Hispanics’ official entrance into society and womanhood and incorporate a host of unique elements and rituals that celebrate girls’ birthdays, as well as their heritage.”

Cotillions and debutantes?! I’d say! The only difference between those traditions and Quinceañeras is that EVERYONE in México and Latin America has a Quinceañera/o these days, it’s not just for the uppity-ups.

You know how much I love Wikipedia...They have a little diddy about debutantes that might ring a few bells:

“A debutante or deb (from French: débutante, “female beginner”) is a young woman of aristocratic or upper-class family background who has reached maturity and, as a new adult, comes out into society at a formal “debut” or possibly debutante ball. Originally, the term meant the woman was old enough to be married, and part of the purpose of her coming out was to display her to eligible bachelors and their families with a view to marriage within a select circle.”

Very similar traditions, indeed. At the bottom of all that money and hardcore party planning is showing the world that now this 15 year old is ready to date/marry/get out of her parents’ house. Back in the day, this was much more of a display to bachelors that a young girl’s family was ready to marry her off. Nowadays it’s really a tradition for fun, family and friends…but as a semi-feminist I still get riled up at the concept.

I mean really, when I was 15, I was just put back into braces. Again. Believe me, my Dad was sooooo ready to get rid of me after round 2 of braces…Can you imagine getting married at 15 with braces?…Ayayay. This blog post is bringing up a lot of weird shit for me! Sorry.

We are not celebrating Deuce’s transition into manhood. It’s more like we’re celebrating that he has not transitioned into death. That’s worth a few pints, cocktails and cake! There will be no tiaras, scepters or bibles on hand and we will certainly NOT have a choreographed dance!

We do have both Godparents present, so that’s pretty good tradition-wise. We will get rip roaring drunk and eat an expensive half dog cake/half human cake. There will be papel picado flags and a piñata hanging from the rafters of a British pub in downtown Queretaro. English bulldogs should be celebrated in British pubs in México after all. So there.

****IMPORTANT UPDATE! Deuce’s Quinceañero was a grand success…except for the cake…***

In conclusion, Quinceañeras are a huge part of Latin American culture. A culture that prioritizes parties every chance they get. Go big or go home at any age! Especially at 15 and in a limo! Peace and paz.

Sombreros…Shading Muchachos for Over 500 Years!

Dance of the Flyers and Birdmen vs. MayPoling and Pole Dancing