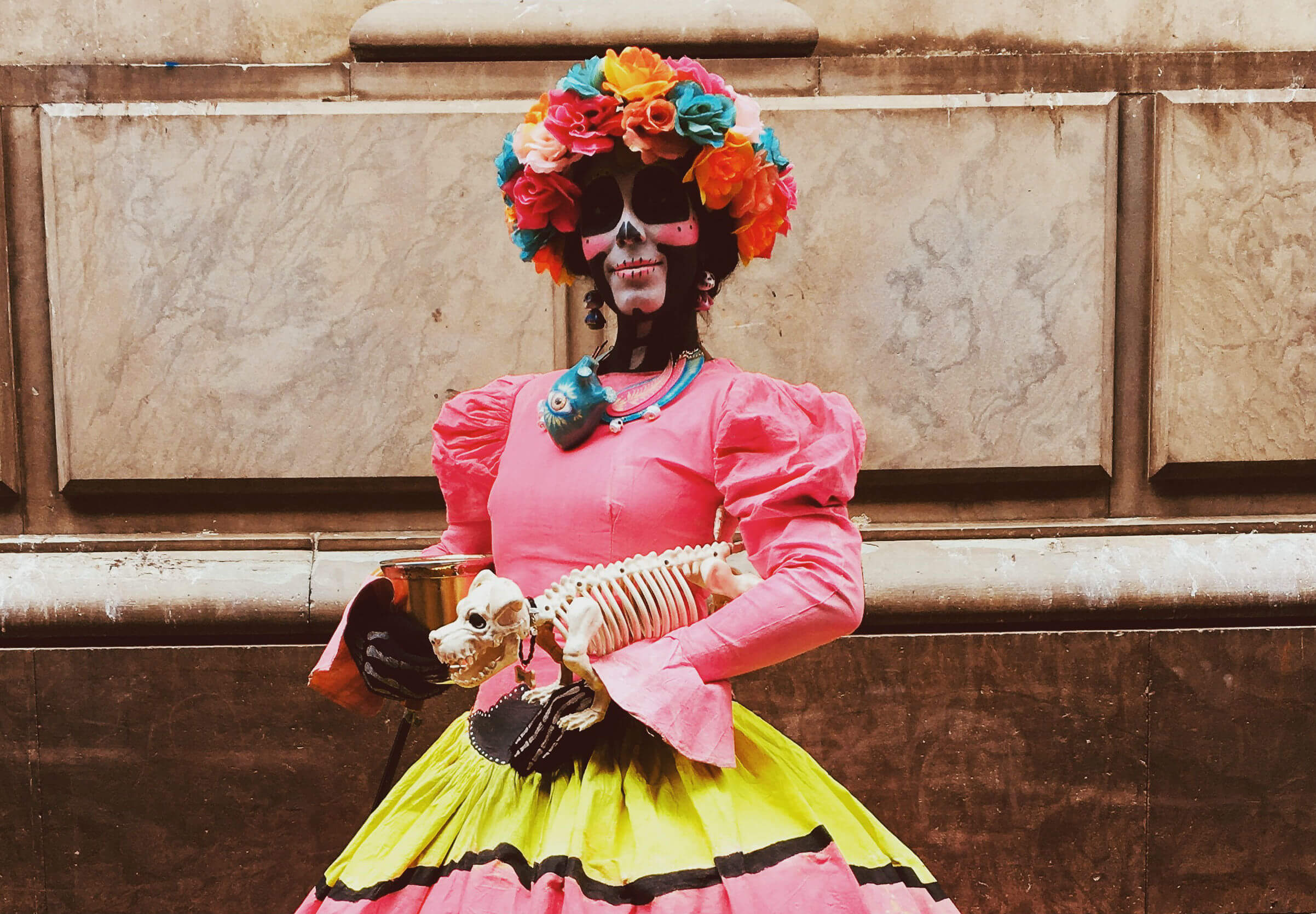 It was a balmy 86º November evening when I found myself slowly shuffling down the main street of Mérida, Yucatan surrounded by a shitload of people carrying candles and dressed as dead people. I was in a crowd of thousands and all I heard was silence. We were quietly walking to the cemetery and I was about to experience my first Day of the Dead, aka Día de los Muertos (Spanish), aka Hanal Pixán (Mayan).

Of course I had heard of Day of the Dead and thought that it was just a bunch of people dressing up like skeletons. “Oh, that’s just like Halloween!” Nope, not a damn thing like Halloween.

I had been living in Mérida for about 10 months by the time October 2011 rolled around. Once October started, everyone in the city began planning for this upcoming, um, holiday?, event?, party?, celebration? The name ‘Day of the Dead’ doesn’t sound like much of a party, but people were acting like this was the most important fiesta of the year.

Day of the Dead is in fact a three day celebration each year from October 31 – November 2nd. It’s an opportunity to commemorate family and friends that have “advanced on their eternal journey.” In the Mexican culture, death is viewed as a natural part of the human cycle. During this time, the living family members pray for the temporary return of their loved ones who now reside in the afterlife/world/place. They share stories of the ancestors who have passed and celebrate their former lives.

Aztecs – Lady of the Dead

The ancient origin of Día de los Muertos in México goes back to the Aztec festival dedicated to the ‘Lady of the Dead’, which in modern times is referred to as La Calavera Catrina. The artist José Guadalupe Posada was the first person to illustrate the goddess in a zinc etching in 1910. She’s super hot, as far as skeletons go.

So anyway, in Aztec mythology, this Lady was named Mictēcacihuātl and was queen of the underworld. She ruled over the afterlife with her hubby. No one ever mentions him, but she was responsible for watching over the bones of the dead and presiding over the ancient festivals of the dead. #respect

The Aztecs in México and central America celebrated Mictēcacihuātl for the entire 8th month of the Aztec calendar year (sometime in the middle of the summer). They partied, danced and sang instead of mourning because being sad for dead people was considered an insult to them. Therefore, they fiesta’ed with food, drink and activities that the dead had enjoyed while they were alive.

The two most familiar symbols of the Aztec version of Day of the Dead are Catrinas and Catrins (dead chicks and dead dudes, respectively). You will either see these images as calacas or calaveras (skulls and skeletons, respectively). The calaveras are always dressed up in colorful outfits and having a blast dancing, drinking, flailing around and generally enjoying the afterlife. If that is what death is all about then rock on!

The calacas, being just dead heads, are usually hanging out on an altar that their family created with a big smile on their face…happily watching the living pay tribute and tell stories about them!

The Spanish invaded México in the 1500’s and brought with them their Catholic religion. This may not sound very Christian, but basically they made a point of enslaving the Aztecs and telling them their customs and beliefs were stupid. Typical evangelicals. The synthesis of Catholicism with the Aztecs’ tradition results in an adjustment of the dates to make Day of the Dead more in line with existing Catholic death-celebrating holidays.

The Spanish moved the celebration from the 8th month of the Aztec year to October 31st – November 2nd of the Gregorian calendar so that it would land on All Saints and All Souls days. Pushy af, but here’s why…

All Saints Day, according to Christianity.com has this origin…”In the early years when the Roman Empire persecuted Christians, so many martyrs died for their faith, that the Church set aside special days to honor them…In the 8th century, All Saints Day was changed by Pope Gregory III to today’s date–November 1. People prepared for their celebration with a night of vigil on Hallows’ Eve — Halloween (possibly because of the strong holdover influence of the Celtic Samhain festival which many Christians in Ireland, Britain Scotland and Wales had continued to observe).”

The Mayans in the Yucatan Peninsula refer to Day of the Dead / Dia de los Muertos as Hanal Pixán and it lasts for 3 days starting October 31st. Sound familiar? Well that’s because the Spanish conquered them too.

Mayan families construct altars in their homes honoring their lost relatives/buddies. These altars include the dead’s favorite food, drinks and games plus they add candles, pictures and symbols of their lives. They even go as far as moving the furniture in their houses to create a pathway from the front door to the altars to help their loved ones’ souls know where to arrive. You know, rearranging all the furniture for guests.

The first night of Hanal Pixán (Oct. 31) is reserved for celebrating the all too short lives of the children whom have passed. Their offerings include toys, chocolates and sweets. The adult souls are not honored until November 1st.

To honor the souls of adults, boozy treats are placed on the altars with candles and their favorite foods. I’m now making a point to start my Day of the Dead celebrations on November 1st for this reason. I’m avoiding the first night because I’m not into kids, especially dead ones. #goingtohell

They close out the 3 day death-fest with a long, slow, silent walk through the center of town. They call it “Paseo de Ánimas” or “Promenade of the Souls”. Everyone wears typical Mayan clothing and have calaca sugar skull faces painted on by street artists. The whole town walks to the main cemetery…so THAT is what I was caught up in that November night in 2011!

Then suddenly the mood changes and a celebration breaks out in the cemetery! It’s magical and like a scene straight out of Pixar’s Coco. People were actually dancing, laughing and decorating the graves of their loved ones with flowers, candles, pictures and gifts. Beers were popping open. Stark difference from the silent mode we were in for blocks and blocks! I def prefer this part of the ritual.

I really did think Day of the Dead was the same as Halloween and it turns out I wasn’t completely wrong. Halloween (All Hallows’ Eve) originated in Ireland and is celebrated on October 31st. As you know most Irish are Catholics and they had the same idea as the Spanish when it came to bastardizing holidays.

So basically European Catholics wanted to celebrate the night before All Saints Day. Which is also known as “A Feast for All Saints” OR “All Hallows’ Day”. So Halloween is the eve of this Christian holiday. Traditionally in Ireland, Spain and other Catholic countries, it is common for families to attend church and visit cemeteries in order to lay flowers and candles on the graves of their deceased loved ones. It’s all coming full circle.

So Halloween / All Hallow’s Eve is the night that the descendants of Mayans and Aztecs celebrate the souls of dead children. Somehow this morphed into Americans thinking, “Hey, the way to celebrate the souls of dead children is to form a path of candy and dress up like all the fun things these kids use to love and that will help show their little kid spirits the way home!” Am I going to hell? Probably. Please join me!

Anyway, I was trick-or-treating as a kid in the States on the same night that the Mayans were honoring children’s souls in the Yucatan. It seems blasphemous now, but it was a fabulous idea then and made October my favorite month of the year! It also made November the most sugar crazed hell on Earth for my parents. I do get the connection of luring a spirit back by displaying / handing out things they loved (candy) while they were with us in this life. Check out these comparisons below:

Mexicans really love American traditions. We gringos celebrate the fuck out of holidays that require dressing up and dealing candy like drugs. Now that I’m an adult, I bypass the whole trick or treating neighborhood deal. I do still enjoy dressing up as a dirty pirate hooker. Or a booby-licious Octoberfest chick. Or a Catrina.

Anyway, many Mexican families have adopted our tradition of dressing up the kids and dealing candy within neighborhoods. It is usually some night the week of or before Day of the Dead so that they can get their sugar fix and still be sacred on the correct date! They have it all! BOO!

My Story / The Actual History of Papel Picado Flags